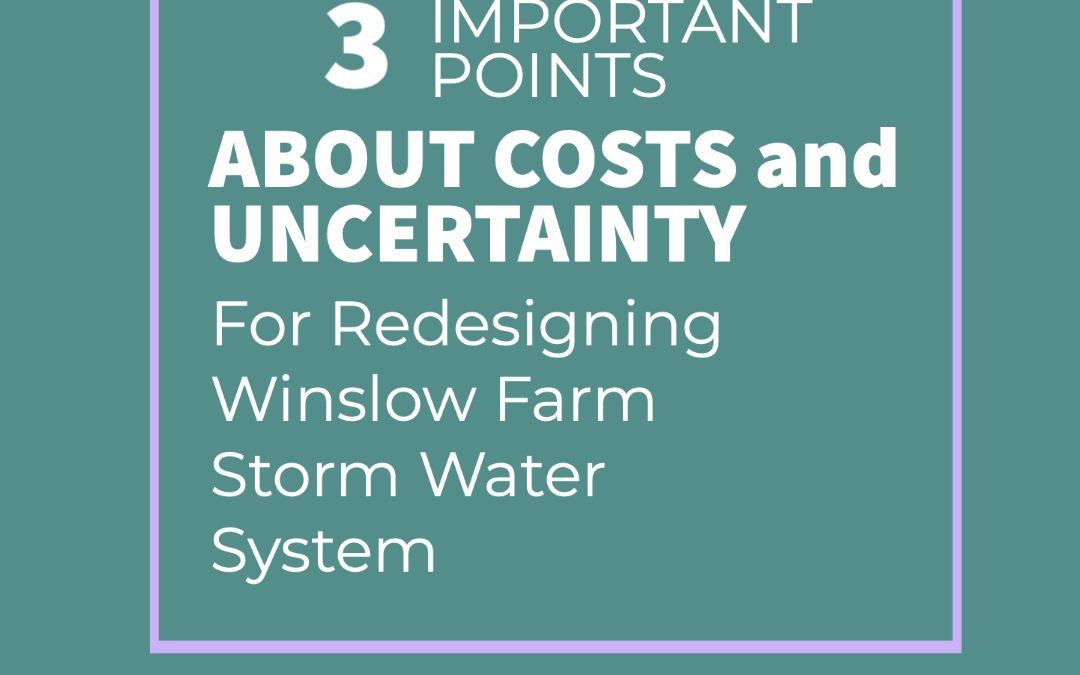 I have THREE POINTS every homeowner needs to understand.

POINT ONE: Future maintenance costs will not be lower, WFCA’s consultant acknowledged.

POINT THREE: He acknowledges the uncertainty of an engineered stream channel to handle all that drainage without significant issues and costs beyond what he estimated.

I know many homeowners were not present for the in-person meeting WFCA called to have Mr. Andrew Knust present his designs and answer questions.

Paraphrasing what he told us in person:

“The maintenance costs for either design scenario are going to be about the same.”

He also said the reason was the cost to maintain the landscaping of the converted wetland area. Pooling of water will still occur in pond 4.

He also acknowledged that with the maintenance of a small sediment forebay the need to dredge again would be f=arther into the future. The liners we purchased, I pointed out, have a 20-year warranty, and he said they should last twice as long as that.

I believe these three steps would greatly reduce the need for future dredging:

In contrast, if the maintenance of the engineered stream channel is not done well, they will look like weedy creeks. They will periodically be flooded over the creek banks with 150 acres of water drainage. This common area is very visible to everyone who comes through the south entrance. A weedy creek is not going to make the neighborhood look nice, and we will have paid a $300,000+ premium to achieve that weedy outcome.

Mr. Knust also acknowledged at that meeting that as presented in his report, the cost estimate he provided for each design scenario could lead people to believe that doing a partial stream conversion would be less expensive up-front.

If we chose to just keep them at the current depth, that would significantly reduce the cost to dredge them, he said. “These are your ponds, and you do not have to dig them deeper if you do not want to.”

Even professionals sometimes propose ideas that are not optimal or the most cost-effective. Mr. Knust says he enjoys doing stream channel conversions. I am glad he enjoys his job, but there are other more cost-effective options without so much uncertainty. some of which he acknowledged he did not fully investigate. See page 36 of his Conceptual Design report under “Recommendations For Future Study.”

Significant “show stoppers” may not be seen until “tens of thousands” are spent paying for engineering plans. Modifications to the plan may drive up the expense to mitigate problems as they are found with all the future study and engineering.

We have all seen the system handles 100-year flood level events without causing any flooding for homeowners. The most recent event was June 18, 2021.

Although he wrote that he has “confidence” that the change to the system will not increase the risk of flooding. “Confidence” is not the same thing as “certainty”. His reports says his simulation indicated the 2 and 10-year flood events would actually be worse for peak flow level in pond 7 with the construction of a stream channel in ponds 3 and 4. Further study — costing thousands of dollars — might yield a design that did not make flood risk worse.

In response to a homeowner’s written question about increased flooding risk, Mr. Knust wrote: “Upstream units [of pond 3] may be at a slightly increased risk, but this can likely be mitigated through careful design at the culvert tailwater.”

In his best case simulation of flood levels, he writes: “it appears that the construction of a stream channel through Ponds 3 and 4 would have a relatively modest effect on peak flow performance and flood elevations in the WFCA pond”

This is a lot of uncertainty.

After hearing him in person, I think design scenario 2 has three new downsides to consider:

For these reasons, I think spending $300,000 (and likely more) just to change TWO ponds to a stream channel is a very expensive and unwise gamble.

Here is the simple solution WFCA could doin 2022 that would dramatically benefit the system.